" Very few Italians know that Italy still has an extraordinary and precious heritage of biodiversity, which lies often forgotten in some remote corner... This project will produce the first and best antidote against this carelessness. "

SEE THE INTERACTIVE MAP FOR THE MISSIONS

Imagine the age-old Bosnian pine trees of the Pollino massif during a winter night....a sunrise on the glacier of the Mont Blanc...the autumnal colours of the Ampezzo Dolomites...the sea of grass on the Campo Imperatore and the fireworks of the erupting Etna...mineral sanctuaries of nature, but also scenarios of alternating human events.

With over 100 missions (almost 700 days spent in the field!) which will be finished at the end of 2018, L'Altro Versante's team will visit all Italy's most beautiful and unusual places.

Thousands of photographs, taken during the day and at night, in all the seasons and also under less pleasant weather conditions, in order to obtain the maximum visual impact and, therefore, the most truthful portrait of the Italian natural landscape.

Also a series of reportages for television to make the viewer revive the phases and emotions of how a good nature photograph is realised.

A search which is at the same time journalistic and photographic and which will tell many enthralling stories. But which will also bring the natural heritage, which Italy can still boast about,, and the real threats which constantly put that to risk, to the general public's attention. Only by means of knowledge and respect , we believe that people can develop awareness of the necessity of conservation of natural environments and biodiversity. 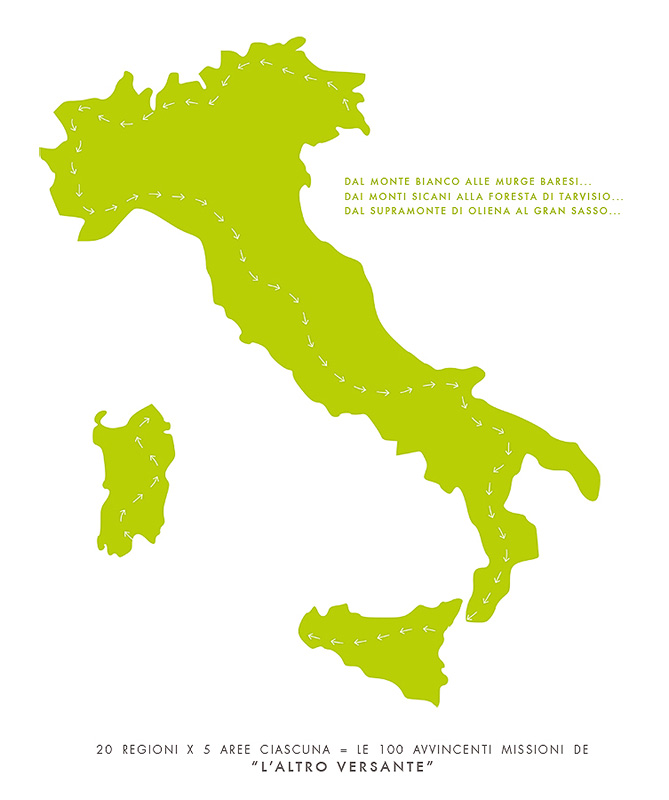